Since the eighties, privatizations became a common feature in the economic policy of many countries. A feature which was also adopted by Spain, after its accession to the then called European Economic Community, when the state-owned enterprises in our country were forced to start their adaptation to Community law regarding deregulation and defense of competition.

It is in this context that, beginning in 1985 and following the international trend, started in Spain the processes for the divestment and sale of state-owned enterprises. The institutions in charge of carrying them out in Spain were the following:

Since the start of the sale processes of those state-owned enterprises until now, over 120 companies have been privatized in Spain in which the State had a shareholding participation. In financial terms, these deals have raised around 45,000 Million Euros.

Most of this income come from the sale of state-owned companies which took place through an Initial Public Offering (IPO), the method through which 14 companies were, in part or wholly, privatized, some of them in several stages. The IPOs made by the State up to now reach 29, with a total income of around 32,000 M€. Up to 20 of these deals included large tranches for retail investors, which promoted the entry of many individuals into the stock exchange.

These deals resulted in the coming into the stock exchange of large Spanish corporate groups which originated and developed thanks to the State’s intervention.   This is the case of such companies as Repsol, Endesa, Telefónica, Tabacalera (Altadis) or Iberia. Equally, some of the privatized companies, through their direct sale or their listing, took part in the creation of European-scale industrial groups in such significant sectors in the world as the aerospace, in which CASA was merged into EADS, or the steel industry, with ACERALIA merged into ARCELOR (now ArcelorMittal).

The first public offering of shares of a state-owned enterprise took place in 1986, specifically for 39% of the capital of Gas y Electricidad, S.A. (GESA), an affiliated company of ENDESA. This public offering was followed, in 1987, by that for 29% of the capital of ACESA, which already had a tranche for retail investors. However, the first two large transactions took place in 1988 for 18% of ENDESA's shares and, in 1989, for 26% of the social capital of REPSOL, both with significant retail investors' tranches.

Of the 29 public offerings which have involved state-owned enterprises made up to now, which have raised a total net income of around 32,000 Million Euros, the largest took place in 1997 and 1998. Special mention must be made to the 2 which SEPI carried out for ENDESA's total privatization, especially the last one, on June 1998, when it put on sale more than 312 Million shares, which represented 30% of the capital. This public offering, in which 80% of the shares were earmarked for the retail tranche, raised more than 6,000 Million Euros.

Up to a total of 10 of these deals have been carried out by SEPI, and another 10 by Patrimonio, 4 by the Sociedad Estatal de Participaciones Patrimoniales. INI made 5, and INH the remaining 4.

Equally, through public offerings, SEPI sold in 2005 the 1,063,636 shares (5.06%) in Aldeasa which it owned as a result of the non-executed green shoe in the public offering which took place in 1997, and again, in 2007, the participation which it held in Endesa, 31.2 Million shares (2.95% of the capital), from the green shoe of the public offering in June 1998 which was not exercised by the global coordinating entities in that deal. 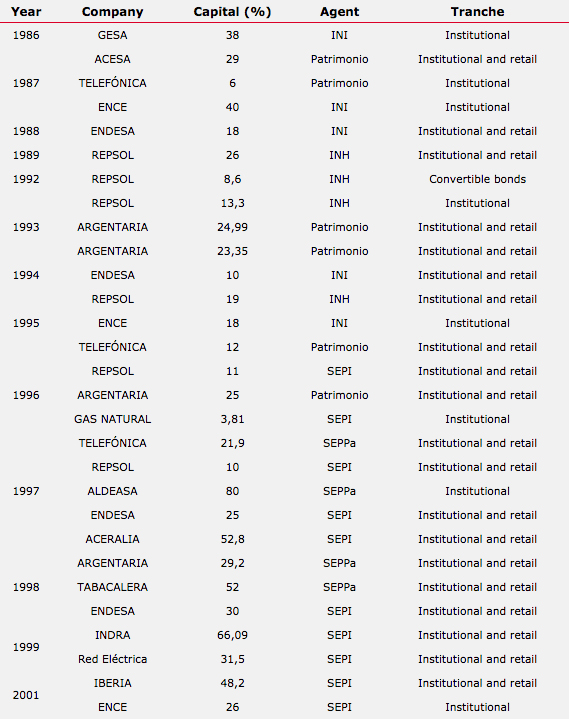 During this period, about 70 sale transactions of State-owned participations took place in Spain. The money raised by the State until 1996 amounted to more than 13,200 Million Euros.

The main objective pursued by these privatizations was the rationalization and reorganization of the State-owned entrepreneurial sector, as well as to restore the competitiveness of its companies. The three entrepreneurial groups then existing in Spain -INI, INH and Patrimonio, were those in charge of the task.

It was in the eighties when the sale transactions took place within the framework of an industrial policy and with more specific objectives. These privatizations were of two types:

In the first case, most of the privatizations affected small or middle sized companies, which lack enough size for competing in the market, being INI which carried out most of the sales. The first company privatized by INI, in 1985 (although the deal was authorized in 1984), was Textil Tarazona.

Within this group of privatized companies appear also some well-known companies in the Spanish industry and with a larger size, such as SEAT and ENASA, from the automotive industry. Also stand out TRASATLANTICA (shipping); Marsans and ENTURSA (tourism); SECOINSA and TELESINCRO (Electronics); La Maquinista Terrestre y Marítima, ATEINSA and Fábrica San Carlos (Capital goods); G. E. Álvarez y ARTESPAÑA (handicrafts), and La Luz, OESA and other small-sized companies in the Food industry, as well as smaller companies belonging to these and to other industries.

The partial privatizations or those of a financial nature made possible to cover the losses incurred by other companies and for self-financing the growth of the partially-privatized companies, as well as to reduce the State debt and meet the European Union convergence requirements. These privatizations of profitable and consolidated companies took place on a case-by-case basis, reducing the size of the State entrepreneurial sector, but keeping the State presence in the listed companies, which might be of a minority nature but enough for controlling them.

Until 1996 16 public offerings were completed, which resulted in a turnover of more than 10,200 Million Euros (1.7 Billion Pesetas) and which made possible the listing into the Stock Exchange of companies which belonged to the second group, such as ENDESA, REPSOL, ARGENTARIA, TELEFÓNICA and ENCE. 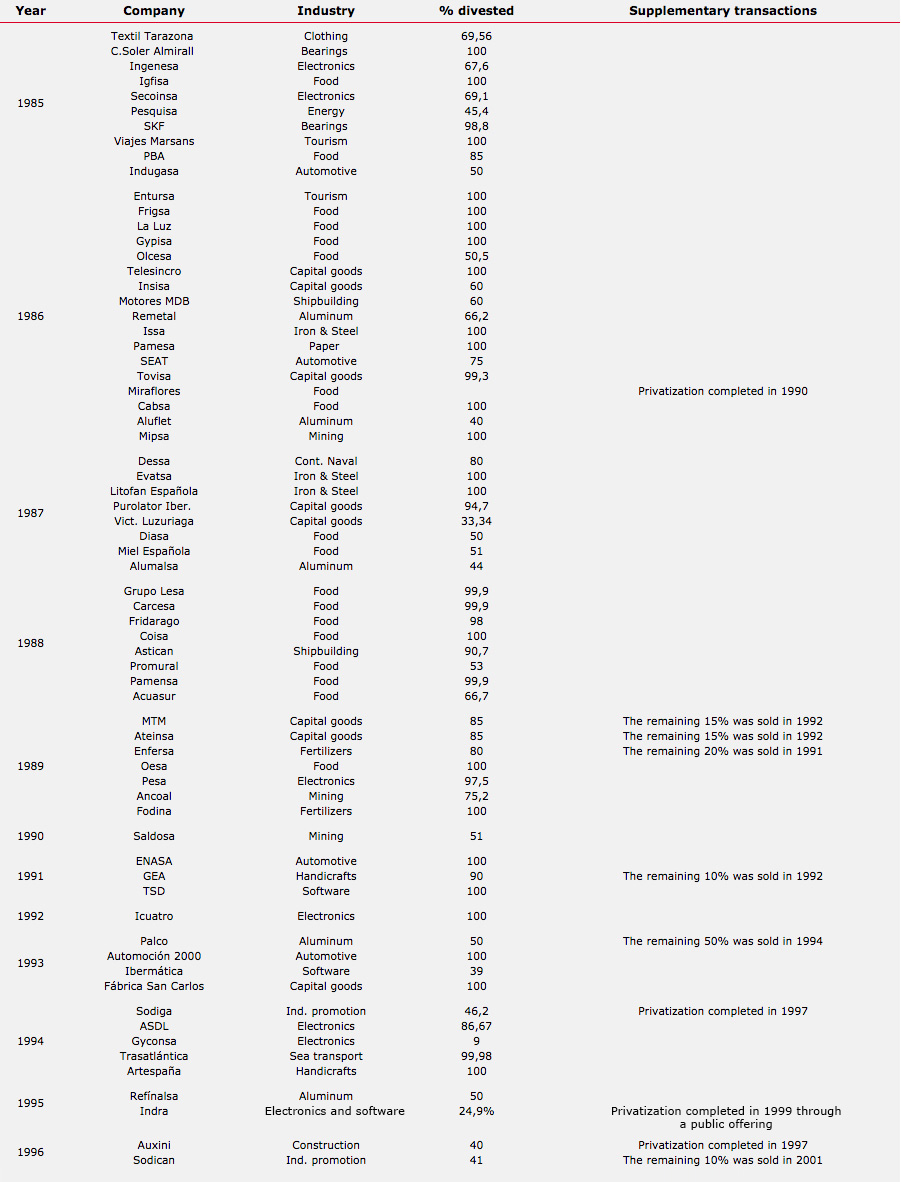 Since June 28th, 1996, after the so-called Program for the Modernization of the State Entrepreneurial Sector was passed, privatizations were programmed from a comprehensive and global standpoint, with the exception of certain industries, as coal mining, railways, the media and some state-owned enterprises which provide a public service.

During this period, about 50 companies completely left the public sector, among which are the main companies in key industries in the Spanish economy, as electricity, gas, oil, air transport, shipping and transport by road, telecommunications, airspace, iron and steel etc. Also were sold 15 land-plots belonging to the company Expasa, as well as minority shareholdings in other companies.

Most of these privatizations were carried out by SEPI, to which must be added those performed, until their merger into this state-owned enterprise, by SEPPa and by the Agencia Industrial del Estado.

The turnover generated by the privatizations carried out during the above mentioned period amount to almost 30,000 Million Euros, of which more than 22,000 Million correspond to the sale deals made through public offerings. The resulting income was basically applied to covering the operating requirements of the Group's companies and to paying off INI's historical debt.

In all the companies the totality of the State shareholding was privatized, with the exception of the non-exercised green shoes in the public offerings, due to contractual commitments (CASA) or due to a legal imperative (Red Eléctrica).

The privatization of Turbo 2000, which was completed in 2004, and the Weser Engineering (an IZAR subsidiary), in 2006, has put an end to this 8-year period in the development of the privatization plan, whose last large sale deal was that regarding the Grupo ENA (Empresa Nacional de Autopistas), in 2003.

After that period, there are few companies left in SEPI which due to their activity might be sold, since most of them are companies with public interest objectives or with an instrumental nature, and some others are undergoing reorganization plans. That is why privatizations have ceased to be a priority objective.

During this period, SEPI has completed the sale of a number of small companies, of its shareholdings in Aldeasa, Altadis and Endesa, which resulted from the green shoe of previous public offerings, and of the 8.5% in Red Eléctrica, as well as the assets in IZAR en Liquidación. The income generated by these sales amounted to 2,000 Million Euros.

In 2013, SEPI finished the sales process of the shares which represent the totality of the social capital of the companies ENUSEGUR, S.A. and ETSA DOI, S.R.L., both affiliated companies of Grupo ENUSA, to MAXAMCORP HOLDING, S.L.

On July, 2014 SEPI concluded the privatization process of Remolcadores del Noroeste (RENOSA), a wholly owned affiliated company of NAVANTIA. SEPI put on record as a public deed the private contract for the purchase and sale agreement of the shares which represent the whole social capital of RENOSA to the consortium made up by the companies Remolcadores Ferrolanos, S.A. (Refesa), Sertosa Norte S.L. and Remolcadores Marracoi S.L.

Privatizations carried out by SEPI, SEPPa and AIE